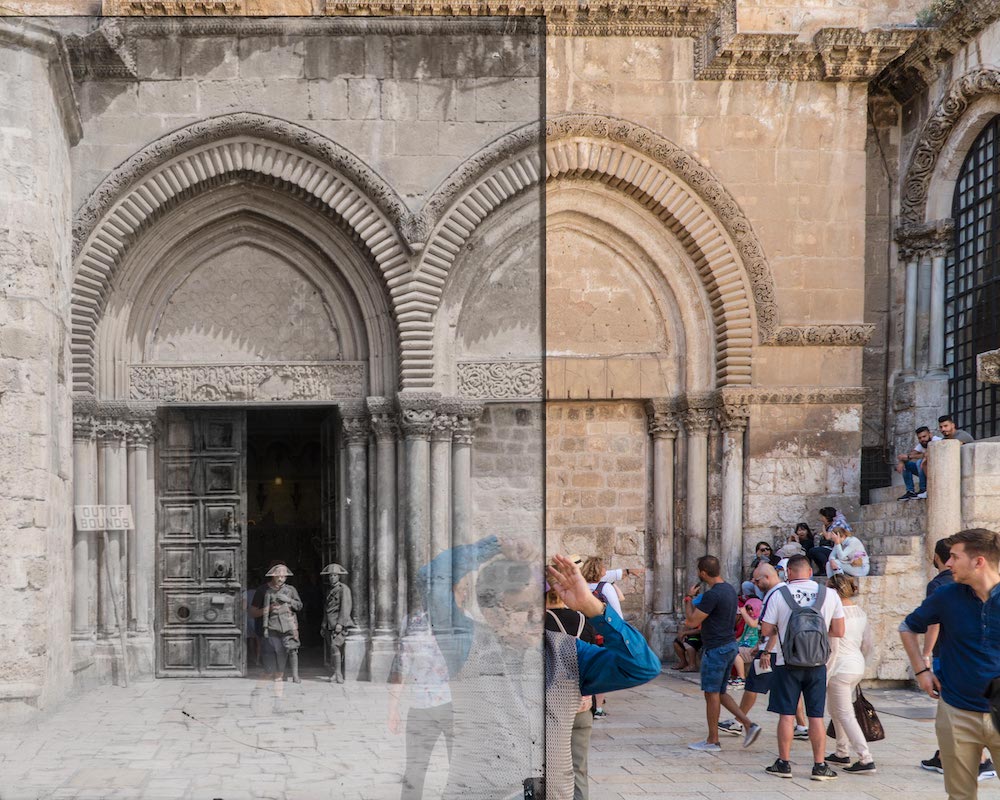 Jerusalem’s landscape, as we know it today, is merely a surface layer, a slice in a long, tumultuous history that has witnessed a succession of takeovers by people and civilizations from the preceding ones. Yet, Jack Persekian presents in this project scenes from the city by superimposing an additional layer – a photograph taken today of the same location, shot from the same spot and angle, over that taken by a photographer some one hundred years ago. Moving between two distinct times allows us to study and compare the changes that occurred over time. In this project, he examines the landscape and forces at play then, now, and, possibly, in the future.

Persekian digs through accumulated layers of history carried in these photographs, unearthing the details of the city, and the lives of its people and places. In a reverse process, he reconstructs its history taking the past as a starting point as he navigates his way to the present. Persekian does not get rid of the present layer, as usually is the case in archaeological excavations, but rather preserves it as an essential layer and a point of return in the interpretations and analysis process.

Persekian deliberately selects images with details that expose the contradictions of the place. Each work in itself is a story that narrates the transformation of the Holy City over time. For example, the vast changes that have occurred around the gates of the old city – not only from an architectural perspective but also from a political and social perspective – are apparent. We can observe the erasure of entire neighborhoods as a result of plans enforced by the colonial powers and executed with bulldozers in sheer denial of the city’s history and reality (the Moroccan neighborhood, as an example).

The current and former occupiers of the city can be seen in the same composition, from different times but almost identical in appearance, and apparently applying similar policies of control and subjugation. It is also clear in certain locations that the architectural changes are a direct result of the colonial perception of the place as a biblical city reincarnated, detached in their minds from its reality.

Some scenes from the old city have not changed much, but looking carefully, one might find new elements here or there, such as an air conditioner installed on an old wall, a façade pierced by bullet, or tourists wandering around in the city. Persekian reminds us that we live in the same place that appears in the old photos, even if the features have changed a bit now. In some works, the lines and details overlap perfectly, and the two images become one. Sometimes, in certain collages, it becomes difficult to distinguish between the old and the new images, which makes us wonder if he’s alluding to the concept that history repeats itself! He obscures some details of the past with the present or vice versa. Nonetheless, it’s not so important to reveal all the details as much as conveying a message or underlining a point. Persekian’s works present Jerusalem as a dynamic city adaptable to its ever-changing reality, yet, a city under occupation and full of contradictions. It is not the ideal, poetic, enchanting place that appears in the pictures of Orientalist photographers which tourists buy in the souks, and it is definitely not the place where time stops. Every layer of the past has been subjected to some form of destruction in favor of the conquerors and dominant powers. The layers in between the past and present clearly prevail in his works, as well as the persistent attempts of the colonial powers to own the city and its history and to remove its people.

Past Tense adds value and dimension to the act of taking photographs in the Holy City and at the same time, strips old images of the oriental gaze that permeates not only in the minds of tourists but sometimes in our minds as Palestinians. By juxtaposing photographs from the past and present, Persekian unloads those romantic, sentimental, and nostalgic sentiments carried by the old photographs and brings us back to our reality, yet better informed and bewitched.