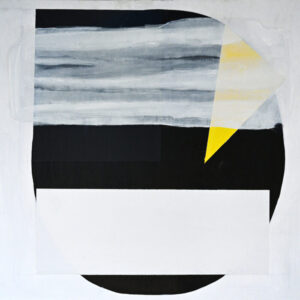 In this exhibition, Qadry explores contiguous areas between the expected and the unexpected; the shape and the spontaneous line; the order and the chaos, the modern and the traditional; loneliness and togetherness. He seeks to create an unstable relationship between different elements on the surfaces of his paintings, as if he is on an exploration mission, aiming to disrupt relations between forms, spaces, and everything that suggests stability and order.

He presents shapes in clear precise lines at times, while on other occasions, he creates chaos by uniting shapes and backgrounds.

Circles and squares dominate his paintings. The perfect circle has always been a source of fascination for its illustrator. Yet, in Qadry’s work, it’s an imperfect mysterious mass that may represent the truth or the center of the painting, but above all, it represents him as a person. He uses the circle as if to indicate his presence on a map of scattered or carefully arranged geometric shapes. It appears as a single spot in the face of a large solid area in “Survival” or obstructed by a rectangle in “An Attempt to Stand Sarcastically”. It blends with lines that hamper its autonomy in “An Attempt to Rise” while forming a union between heaven and earth in the work “On the Threshold of Question”.

The circle stands out powerfully against the backgrounds with contrasting colors as well as against the shapes that obstruct its independence. The secret of Qadry’s circle lies in its ability of containment; it contains the scene, the viewer, and other shapes.

The square is just as important in Qadry’s works. It is a major recurring element and often appears within arrangements of lines, empty spaces, or reoccurring elements, forming layers of color and new dimensions.

The square is sometimes surrounded by empty spaces in reminiscence of Malevich’s square. It may symbolize constancy, but it may also symbolize “land” or its “loss”. Qadry emphasizes this by repeating the square to the point of vanishing, experimenting in shades as in “Spaces of Absence”, “The Search for the Missing,” and “The Complete Shades of Death”. In these works, the lonely square tries to merge with its surroundings.

Qadry uses the triangle to connect the rest of the geometric shapes on the surface of his paintings, but he does not use his base to stabilize it; on the contrary, he paints it hovering at the top part of the painting, creating a state of anxiety with adjacent shapes.

Qadry creates spaces of tension between shapes and lines as he tries to explore the shift from the unity and independence of shapes to forming a unity in a form that is difficult to discern.