Visualizing Palestine: An Intimate Portrait of a Land | Zawyeh at Abu Dhabi Art 2018

Zawyeh Gallery presents ‘ Visualizing Palestine: An Intimate Portrait of a Land ‘, an exhibition of selected works by two of Palestine’s most significant and senior artists, Nabil Anani and Sliman Mansour. Both primarily painters have played a crucial role in defining modern art in Palestine. Their works are a repository of images of the Palestinian experience, but particularly of the landscape as reimagined and revisualised through both artists’ intimate knowledge of its stories, history and the contemporary devastations visited upon it. Their timeless images evoke the specific geography of this place while telling us about the occupation that has redesigned its borders and contours. In vibrant colours and with bold, emphatic drawing, both artists render a vivid experience in paint of the specific Palestinian geography with its iconic and ancient olive trees, the traditional stone houses of the villages built into the terraced hillsides, and some of the more modern manifestations of ‘home’: the refugee camps now similarly embedded in the Palestinian topography.

Their works also portray the people whose lives are intimately connected to the land, to its subtle modulations of light and shadow, the daily sunrises and sunsets and the seasonal rhythms. The men, women and children who have lived and worked on this land have strived to preserve its cultural heritage and protect it from theft and appropriation. Symbolic, yet crucial, images—the olive groves and their harvest, the nurturing maternal figure in traditional dress, the refugee with only the simple garment she stands up in, images in photographs of those who have gone before who gave their lives for freedom fill these paintings by two artists who have made such an important contribution to Palestine’s visualisation of itself. Nabil Anani and Sliman Mansour are both seminal figures in the history of art in Palestine. Members of the New Visions group of artists formed in the First Intifada, they used non-traditional art materials such as earth and leather in multimedia and assemblage works as a means of boycotting traditional paint and canvas that came from Israeli suppliers and protesting against the violence of the occupation. They are the two most influential artists in the history of modern Palestinian visual arts, whose lives and work have been concurrent with the timescale of events in Palestine and who have articulated and envisioned that legacy in the powerful works of art this exhibition presents for the first time to the audience at Abu Dhabi Art. 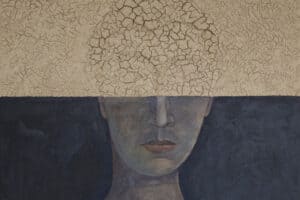 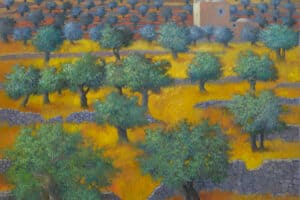 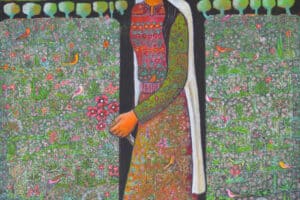 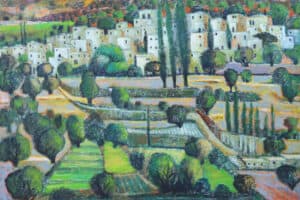 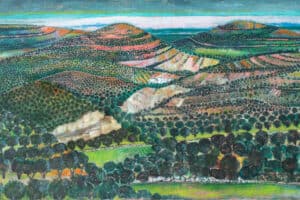