The exhibition Palestinian Art: Resilience and Inspiration presents a group of prominent Palestinian artists, who have been inspirational not only to the younger generation of artists in Palestine but equally to the wider audience. In a time of defiance and instability in the region, the artworks deliver a message of resilience in the face of all odds.

In Khaled Hourani’s works, the spirit of resilience is apparent and strong. Each work presents a child jumping high in the air over the Israeli Apartheid Wall, which appears of no significance or importance. Hourani focuses on the young generation, who takes upon themselves to challenge occupation regardless of what happens in the political arena; these are the same kids who are seen in demonstrations on the streets bare-chested challenging heavy Israeli artillery, the children of the future.

On the other hand, Nabil Anani’s series of artworks titled “Demonstration” present tangled bodies of women, men, and children moving in different motions. The spontaneity of the people – women holding children, couples hugging, children sitting on the shoulders of mothers, reflects the centrality of protest against the occupation in the lives of Palestinians. In each artwork, one can catch a glimpse of a domestic animal, a dog, a dove, or a goat hidden between the human bodies as if the artist is trying to include various elements of daily life in these communal actions.

On a long stretch of canvas, Sliman Mansour’s “Revolution was the Beginning” tells the story of Palestine since the Nakba of 1948. Starting with the displacement of Palestinians the artist presents several milestones in the Palestinian struggle. The canvas starts with a scene of a refugee camp under a dark thundery sky (on the right) and ends up with an image of a young man and woman marching while carrying a Palestinian flag (on the far left). Several direct symbols appear in the artwork, reflecting the right of return, imprisonment, the Apartheid Wall, martyrdom and the transformation of the nature of the Palestinian struggle through history. The artist makes the Dome of the Rock and olive groves, a focal point in the painting.

Tayseer Barakat participates with two artworks titled “Light in the Dark.” Unlike the classical realism style of Hourani, Anani, and Mansour, both works are abstract in style. Yet the artworks tell the story of people in confinement yearning for freedom. They consist of several windows of mainly black and white colors, each presenting a different story: 1948 Nakba, dispossession, the Intifada, Israeli invasions of Palestinian towns, the Apartheid Wall, Jerusalem, and other details of living under occupation. One can notice a competition between the black and the white colors, a fight for domination in each square as if the artist is redeeming the “white” from a well of a lost memory (black) in an attempt of documentation for future generations. 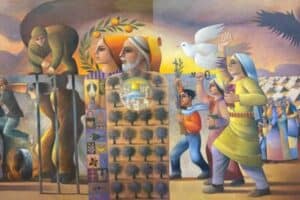 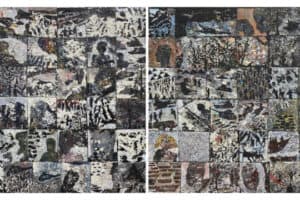 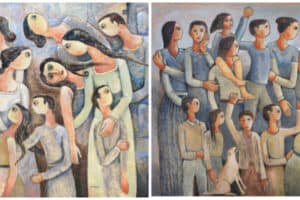 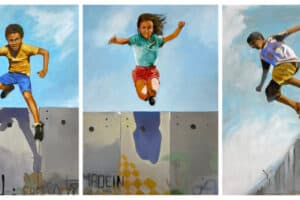