leaping over the barrier khaled hourani 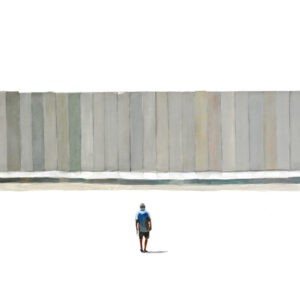 LEAPING OVER THE BARRIER | KHALED HOURANI

The separation wall is the subject of the solo exhibition of the Ramallah-based Palestinian artist Khaled Hourani at Zawyeh Gallery, Dubai, opening on 19 September. The new show Leaping Over The Barrier is a return for Hourani to paint the separation wall.

Hourani says “There are plenty of topics that one can discuss, in particular since the Covid-19 pandemic.” Yet he is drawn back to the subject of the separation wall as it “condenses the meaning of “occupation” that continues to disrupt our lives,” but also it is growing “taller in Palestine and elsewhere in the world.” In this exhibition, Hourani demands the building of all kind of walls stop, “My inner voice asserts: Stop the walls so I can stop painting them,” he states.

For him, it is important to circumvent barriers, especially that more barriers are being built “between what is normal and what is not in life; between homes; between a farmer and his fields; between a believer and his worship house; between the scenery and the painter.”

Hourani tries to remove the wall and transcend it through his paintings. He paints young men climbing using hands, ropes, and ladders, but he also paints them climbing the wall relying on their imagination. He depends on media images from Palestine documenting people climbing over the separation wall to a certain extent.

Khaled Hourani is a prominent Palestinian artist. He was the Artistic Director of the International Academy of Art Palestine from 2007 – 2010, and it’s General Director from 2010 to 2013. He also worked as General Director of the Fine Arts Department in the Palestinian Ministry of Culture (2004 – 2006). As a painter and a conceptual artist, he was awarded the Leonore Annenberg Prize, Creative Time for Art and Social Change in New York City in 2013. Hourani was the initiator of the 2011 Picasso in Palestine project, and The Stone Distance to Jerusalem project. He has participated in several exhibitions including the Sharjah Biennial, 2011.