In Rana Samara’s Intimate Space we witness what appears to be a typical domestic scene, but on closer inspection small details reveal telling clues – lingerie peeks out from beneath rumpled sheets, belts hang from the bedstead, a half-used pack of Viagra lingers – signs which tell a story of what has gone before, the desultory evidence of intimacy. These bedrooms are familiar domestic spaces, but in Samara’s paintings they are transformed into repositories of social neuroses and taboos that the artist both seeks to scrutinize and demystify. Virginity. Intimacy. Sexual desire. Gender. Social norms. These issues, so pertinent in both the female realm and the society at large, are often hidden, unexplored or even dismissed at an artistic level in the context of a nation still struggling under years of military occupation. Her artwork affirms the feminist conviction that the personal is the political. Intimate spaces are translated into large-scale canvases, and continuous frank conversations with women become the backbone of her work, transcending the private sphere and placing it in the realm of the public. Samara’s work challenges these notions of not only what women can discuss but what issues are valid in society as she invites the viewer to intrude in the daily lives and experiences of women towards greater empathy and understanding.The light and playful mood of her paintings also demand our reconsideration of these sites of intimacy as a place of shame. For her, issues of sex and sexuality must become public discourse, and so public engagement is of utmost necessity. For Virginity Handkerchiefs groups of men and women were invited to consider their understanding of a tradition whereby a blood-stained handkerchief must be presented as ‘proof’ of a woman’s maidenhood on her wedding night by producing their own ‘virginity’ handkerchiefs. In doing so, the barrier between the private and the public is dissolved and thus the artwork and its creative process become a site of candid discussion and analysis of social norms.As a multidisciplinary artist, Samara’s works embrace diverse mediums such as film, video installation, sculpture, embroidery, and painting. Mundane household objects are reclaimed – handkerchiefs and oven mitts – and a story in the ordinary materializes, one that alludes to both the female wisdom that influences her practice and the ‘suffocating [female] roles’ that she witnessed as a child growing up.Samara is one of Palestine’s finest young talents with work that bridges many disciplines. Her commitment to art, subject matter, and social issues pushes the boundaries of society’s conventions and progresses her work from an exploration of the self into an awakening of dialogue born from personal and collective experience. 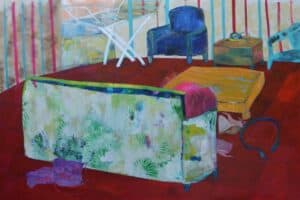 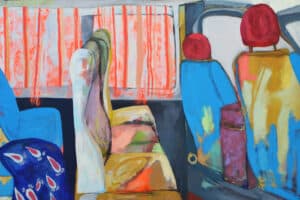 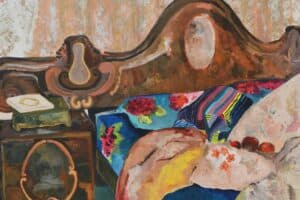 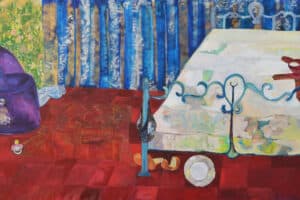 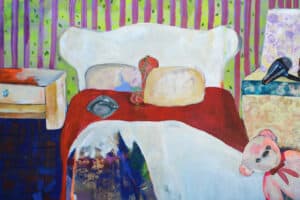 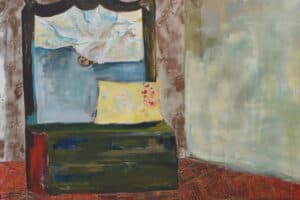 I have always been intrigued by both the stories and untold silences women transfer from one generation to another, in particular from mothers to daughters. Women hide great stories and if you give them the opportunity they will make great storytellers. Intimate stories and female wisdom are the sources of inspiration for me and for my practice. That said, perhaps my own experiences are a latent inspiration too. I grew up in a typical Palestinian family and consequently spent most of my childhood and teenage years observing and analyzing social and gender relations. I came to understand how precious, yet also suffocating women’s roles as carers and nurturers can be.
Women, gender and sexual relations comprise the backbone of my work. It all started after a walk in Al-Amari refugee camp where I began wondering about the sex life of couples living in such condensed spaces that affords them almost no privacy. This privacy is especially difficult to achieve considering the large size of most Palestinian families and the cramped proximity in which neighbours and families live to each other. In my research I investigate the social contexts of sexuality and rely on the personal testimonies of the women I met. I had conversations with them about virginity, intimacy, sexual desire, gender norms, and their convictions, relationships and roles vis a vis the younger generations. These conversations form the cornerstone of my research for my practice in which I utilize various forms including painting, video, installation and also embroidery.
Bedrooms reflect a woman’s social class, sexual life, and the amount of privacy they have – and at times can even resemble a crime scene. I explore the question of where we are positioned as a viewer to these rooms and how through voyeuristically intruding on the scene we are able to sense the lives of the women who inhabit and perform their sexuality in these rooms and the relationship between place and social norms. As Palestinian society is predominantly conservative, virginity is extremely important and proof of it is still sought by the groom’s family. This proof usually takes the form of a blood stained handkerchief that is shown to the women in the family after the wedding night. For this project I gave handkerchiefs to different men and women and asked them to embroider upon them their views and understanding of this longstanding tradition. Working across different mediums and forms enables me to explore intimate and taboo questions of female sexuality in my society.
I wonder what kind of intimate situations are born in a space and how many stories there are to share and I am keen to explore how this manifests in different places, contexts and corners of public space.