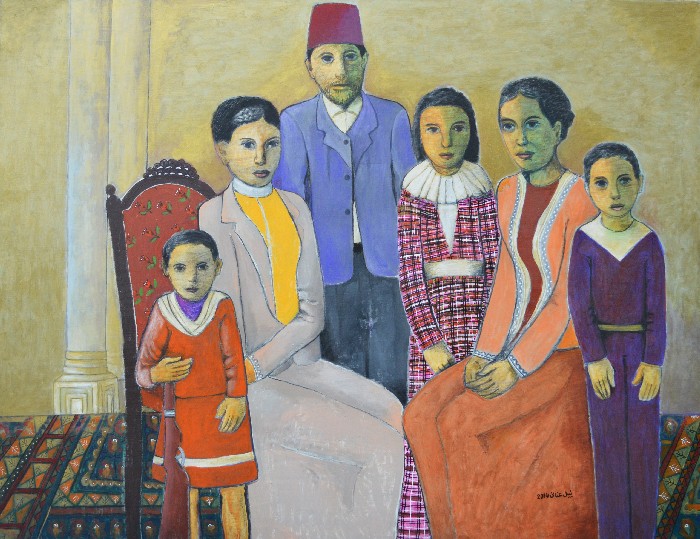 “These intimate mementos of a past irrevocably lost circulate among us, like genealogies and fables of a wandering singer of tales. Photographs, dresses, objects severed from their original locale…Much reproduced, enlarged, thematized, embroidered and passed around, they are strands in the web of affiliations we Palestinians use to tie ourselves to our identity and each other.”

Nabil Anani’s new series of works explore life before 1948 through returning to the mementos of family albums. His paintings are inspired by a selection of photographs of different family portraits taken in the first half of the century in Palestine. Photographic portraiture was an important form of cultural identity for the Palestinian community, recording the formations of lifestyles, family life, educational, economic, and political institutions. It is through the lens of the photographers and the narratives of those who lived through decades prior to 1948 that we have a window onto the world of former Palestine and its community.

The family album holds a unique place in the collective history and memory of Palestinians, in the absence of national archives, the multitude of personal albums and photographs embroiders the national narrative and becomes a precious totem in recalling how life was. Out of the photograph unfolds a multitude of stories, anecdotes, and memories- recalled and recited, handed down to the next generation through oral traditions so as not to be lost or forgotten. The photograph plays a key role in both the preservation and narration of memory, a fragile –temporal object that triggers memories of the past and from which spins the tales of our histories. “The silence of the photograph, its promise of visual intimacy at the expense of other senses, makes the eruption of that narrative, the telling of its story, all the more poignant. The narration of the photograph will itself become an object of nostalgia. Without marking, all ancestors become abstractions.”

Many artists have used photographs as a source of inspiration for their work and often engage in creating a mimetic representation of the image, focusing on likeness, or attempting to rival the photographer’s craft through painting. However, Nabil Anani is less concerned with likeness but rather with capturing intimacy, family poses, and stature, imparting through the various paintings a sense of wholeness and completeness- taking us back in time with his hues and textures to an era before loss and longing, and with that imparting a deep sense of nostalgia. His paintings act as a form of imaginary reunification with our past communities through which he attempts to create a palette of remembrance and plentitude set against the background of the experience of dispersal and fragmentation of Palestinian families.

The artist makes it impossible for us to forget, through revisiting these photographs through his artworks, that these people, who pose in the paintings, looking at us with their vacant gazes, are forever lost to us, departed in death or transformed now with age, The works serve to freeze time, while reminding us that: “Photography is the mirror, more faithful than any actual mirror, in which we witness at every age, our own aging. The actual mirror accompanies us through time, thoughtfully and treacherously; it changes with us so that we appear not to change.” 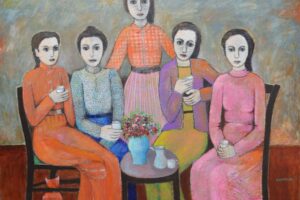 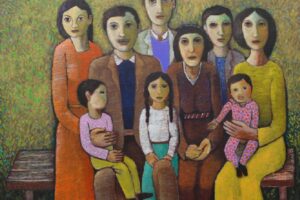 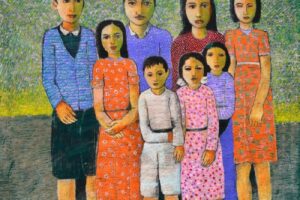 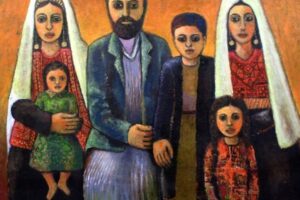 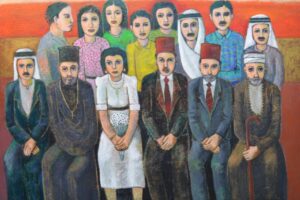 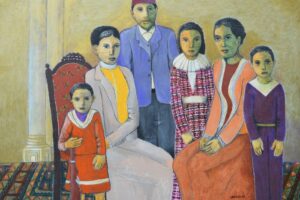 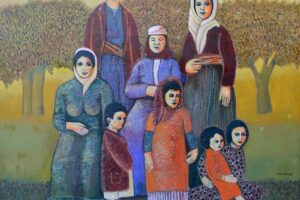