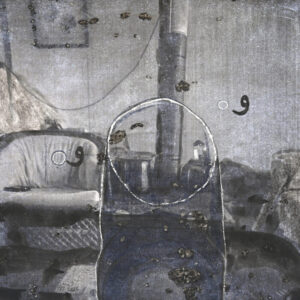 When a cloud carrying a collection of tiny water droplets meets the top of a mountain, mist or “Ghatt” (as called in the Golan Heights) is formed. Thin transparent white aura envelops all familiar places urges us to make effort to distinguish what’s around us from a different perspective and contemplate places as if seen for the first time.

In this exhibition, Shada Safadi and Akram Al Halabi rediscover their homeland through narratives of memory, myths, and daily life practices by taking a step backward and contemplating the scene in relation to its broader context. They place the past, present, and future in one crucible when producing treated, altered, and transformed visual scenes using a range of techniques. The show is an invitation to contemplate the scene and daily practices in the occupied Syrian Golan Heights and to consider the beauty and contradictions that surface as a result of the paradoxical dynamics between the habitual and unfamiliar.

The two artists present a joint conceptual composition and multi-layered surfaces by creating visual rapport between images, colors, and shapes using simple techniques. Both artists apply a combination of predominantly abstraction and monochrome colors including in the video art, they present: “Whisper” and “Gaze 3”. A white aura envelops most of the artworks as if it’s a remnant of mist floating in the atmosphere while Halabi’s audio work puts the artworks back in the context that they emerged from, the occupied Golan Height.

Each artist has his style when approaching the subject. Safadi dusts off childhood memories and the deeply rooted beliefs by discussing the symbolism of the place in an attempt to restore personal stories using abstraction, collage, cyanotype printing as well as installation work. She treats the surfaces of her artwork by using salt; an effect similar to mist, as if she is projecting her subjects through the clouds of memory. She presents a text in Braille in a glass frame that can be seen but not touched, forming a background to the stories and scenes hidden in the nooks of the past.

Al Halabi relies on photographs of daily life in his artistic production. He treats those images using colors, lines, and Arabic letters. He focuses on symbols and representations weaving a bond between the altered images of abstract reality and letters he illustrates . Its an attempt to make the scenes speak, by creating relevant strong loud sounds. For example, he uses the letters “W” and “Z” in Arabic, in a scene related to faulty electrical wires. He employs ready-made images of people or animals and introduces them to abstract shapes using colors and inks. As he emphasizes certain movements of elements in the artwork, one can feel his images moving despite their stillness, and making loud noises despite their silence.

This exhibition is a state of contemplation in a changing reality. It’s a reflection of a time that is slowly passing in a familiar place beset with contradictions, some of which are imposed as a result of occupation and the prevailing political situation. Artworks are shrouded in the “mist” of memory as a result of the dynamics of a confused reality as well as deeply rooted myths and beliefs.