Bashir Abu-Rabia was born in 1951, in Beer-Sabe’ in the Negev. His formal art training began in the Avni Institute in Tel Aviv and was completed at the Ecole de Beaux Arts in Paris. He now resides in Jaffa where he works as a painter, teacher and sound and graphics designer for films and motion pictures. He has held 5 solo shows and participated in many group exhibitions across the Middle East, Europe and North America.

Our eyes are first drawn to the thick, bold lines that cut across his paintings in a clear stylistic progression from his former works. It is said the lines simulate a typical desert wind, that cuts through the pitiless heat of the Negev desert in undulating waves, but at times it appears as if these lines are oppression itself, penetrating the landscape and enclosing the figures in an erasure of memory and landscape and an attempt to “disturb the peace.”

In this spontaneous composition of forms and shapes, Abu-Rabia presents to us life situations of the tribe. Certainly, the Bedouin are people who understand the trials and tribulations of a “disturbed peace”: forced migration, cultural disruption and foregone uncertainty are a daily reality for many. The paintings tell this narrative of a fraught tension between place, man and machine, and the interplay of these three elements is at times confrontational, with all aspects vying for visual dominance. The artist was born in a village founded as a government project to forcibly place Bedouins in permanent settlements and this tension of man and the man-made is tangibly reflected in his works.

While some paintings seem to vociferate the futility of a hopeless situation, others evoke the optimism of the bright, indigenous foliage – Retama, Pistacia and Acacia – that blooms through the wilderness of the Negev in defiance of the muted tones of desert rock. There is a chaos to the depicted scenes that asserts an aesthetics of displacement; yet through the vivacious hues and expressiveness of composition we see an expression of life in the face of adversity and testament to the glory of existence itself. 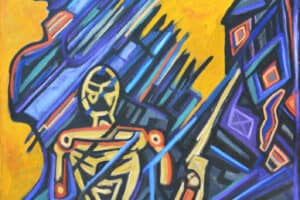 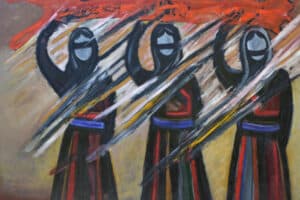 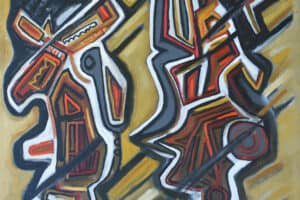 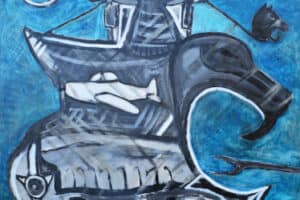 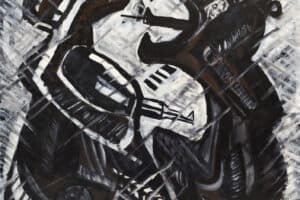 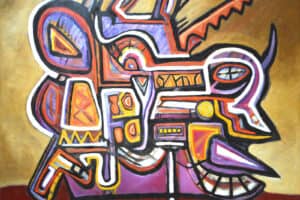 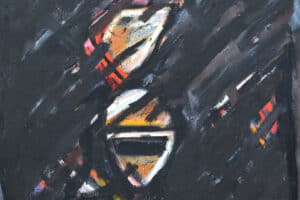 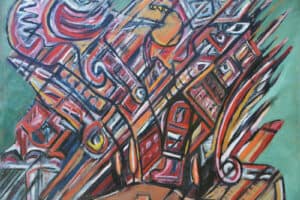 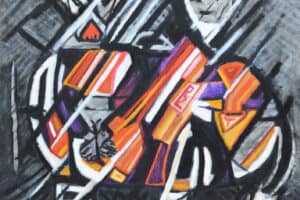